BAC Contributed to the Successful Holding of THAC ADR Webinars 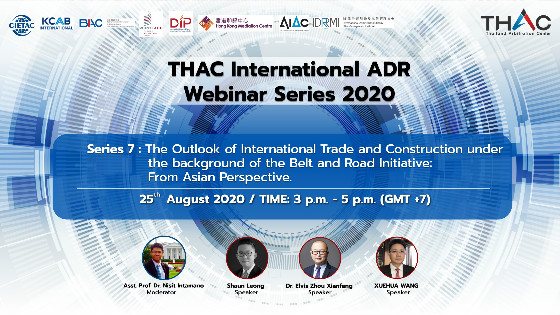 The webinar on August 25 2020 was themed “The Outlook of International Trade and Construction under the background of the Belt and Road Initiative: From Asian Perspective”. The webinar was moderated by Mr. Nisit Intamano, Associate Professor of University of Wisconsin Madison. Dr. Zhou Xianfeng, Arbitrator of the BAC and Partner of JunHe LLP, Dr. Wang Xuehua, Arbitrator of the BAC and Partner of Beijing Huanzhong & Partners, and Mr. Shaun Leong, Independent Arbitrator, acted as the speakers. Dr. Wang provided an in-depth analysis of the current situation of world economy and trade, and specifically introduced the Multiparty Interim Appeal (MPIA) Arbitration Arrangement of the WTO and the Unreliable Entity List of China. Thereafter, taking the economic and trade situation of China as an example, he pointed out that ASEAN countries has surpassed the EU and the United States to become the largest trading partner of China. Meanwhile, investments in countries engaged in the Belt and Road Initiative has kept going up, and ASEAN countries have become China’s important investment destinations. In the future, with further cooperation with such countries, the establishment of a uniform dispute resolution mechanism will assist to speed up the recovery of the world economy. Dr. Zhou focused on the performance of construction contracts in the context of COVID-19 outbreak. By referring to several possible situations in the present circumstance, he stressed on the relationship between hygiene, health, environment and contract performance. Centered on government actions, frustration of contract and force majeure, Dr. Zhou gave a detailed analysis and provided a series of suggestions and thoughts on the conclusion and performance of contracts. 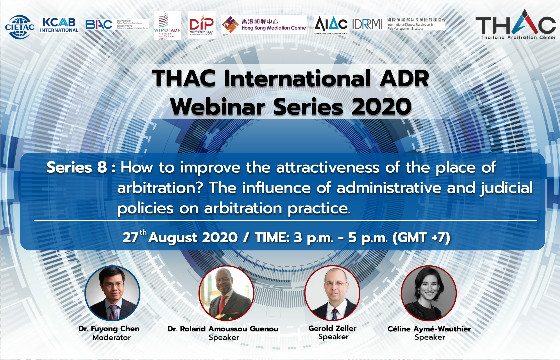 The Webinar on August 27 2020 was themed “How to improve the attractiveness of the place of arbitration? The influence of administrative and judicial policies on arbitration practice”. Dr. Chen Fuyong, Deputy Secretary General of the BAC, acted as the moderator, Mr. Roland Amoussou Guenou, Partner of Vovan & Associes, Mr. Gerold Zeiler, Founding Partner of Zeiler Partners, and Ms. Céline Aymé-Wauthier, International Arbitration Lawyer, acted as the speakers. During his speech, Dr. Chen presented an introduction of a series of pro-arbitration measures adopted by Chinese courts and related governmental authorities in recent years, including: First, the scope of foreign-related factors has been enlarged, and disputes between wholly foreign-owned enterprises registered within the Shanghai Free Trade Zone are recognized as foreign-related disputes; Second, ad hoc arbitration has been recognized to a certain extent, which means enterprises registered within the Shanghai Free Trade zones are allowed to refer their disputes to arbitration at selective venues in mainland China, pursuant to selective arbitration rules, and by selective persons; Third, the domestic arbitration market has been further opened, where international arbitration institutions are allowed to develop their foreign-related business in the Shanghai Free Trade Zone Lin-Gang Special Area; Fourth, commercial arbitration cases have been put under centralized judicial review, and Chinese courts are required to designate specific tribunals to review cases concerning commercial arbitration; Fifth, the report and review procedure for judicial review of arbitration becomes applicable to domestic cases; Sixth, the establishment of the International Commercial Court and the “One-stop” international commercial dispute resolution system thereof. During the Q&A session, the speakers had exchanges with participants on issues such as the legal nature of the seat of arbitration, the attractiveness of arbitration in Thailand, Austria and some African countries, the influence of arbitration fee and the participation of foreign arbitrators and lawyers in arbitration in China.

In the context of the COVID-19 outbreak, these webinars present a new type of exchange that is jointly explored by the BAC and the THAC. As a leading arbitration institution in China with growing influence around the world, the BAC has constantly strengthened its exchanges and cooperation with world famous arbitration institutions, and endeavored to be a pioneer of international dispute resolution practice and culture exchanges. We always welcome professionals from various industries to continue to pay attention to events organized and participated in by the BAC with utter sincerity.
Model Arbitration Clause Arbitration Clause
All disputes arising from or in connection with this contract shall be submitted to Beijing Arbitration Commission / Beijing International Arbitration Center for arbitration in accordance with its rules of arbitration. The arbitral award is final and binding upon both parties.
Events
More >>>
Copyright© Beijing Arbitration Commission. All Rights Reserved.link   |   Copyright