On July 30 2020, the webinar on “Future of China-America Commercial Dispute Resolution” jointly hosted by the University of Southern California Gould Law School and Judicial Arbitration Mediation and ADR Service (the “JAMS”) was successfully held. This event has attracted more than 300 participants from all over the world. The Beijing Arbitration Commission / Beijing International Arbitration Center (the “BAC”) was a supporting institution of this webinar.

The speakers had in-depth exchanges on issues such as whether the geopolitical crisis impacts the China-America commercial exchanges, the draft of dispute resolution clauses in China-America commercial transactions, whether the selection of seat of arbitration, applicable law and arbitration institution will lead to new changes due to the unpredictability of the political ties between China and the United States, the short-term and long-term impact of COVID-19 on international arbitration, the application of online hearing and international arbitration’s opportunities and challenges.

Mr. David Huebner was of the view that the U.S. government’s political stand will not have subversive impact on the long-term cooperation that has already been established between Chinese and American business entities. The China-U.S. economic link is intricate and complex, and the China-U.S. decoupling will result in enormous economic disaster and political unrest, which is apparently unrealistic and impossible. A great number of business entities of cross-border transactions have paid several years or even decades to plan and manage their business structures, and so they will not have their long-term plans and arrangements disturbed due to the events or campaign issues newly happened in recent weeks. Dr. Chen Fuyong said that China and the U.S. have extensive cooperation in various commercial areas, and how the geopolitics tension will impact the China-U.S. business exchanges still depends on the business entities’ attitudes towards such new situation. The lasting non-governmental contact and the unremitting efforts between the two states will inevitably get the China-U.S. relationship back to normal. From the perspective of China, in recent years, China has been continuously promoting the openness and innovation in various areas including finance and arbitration, and looking forward to having exchanges and cooperation with American enterprises in a broader range. Mr. Cedric Chao agreed that in the foreseeable future, there will be still huge number of commercial contracts that will be concluded between Chinese and American entities, and thus they will need to jointly learn to prevent and resolve disputes, and jointly face the unpredictability of the political environment. 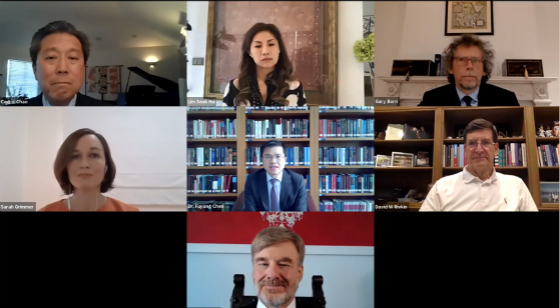 As to whether the Hong Kong National Security Law may influence the independency of Hong Kong judiciary and arbitration, Ms. Sarah Grimmer thought that the law aims to fight against crimes concerning national security, and thus will not have any impact on the part related to international arbitration under the framework of Hong Kong law, and that Hong Kong courts will continue to provide support to arbitration development as always, and will not be hesitant to enforce arbitral awards concerning parties from the mainland. Mr. David Rivkin also said that the influence of the Hong Kong National Security Law should be viewed differently from the perspective of politics and the perspective of commerce, and it will not impact the independence of Hong Kong judiciary.

When talking about whether the selection of means of dispute resolution will be changed following the political situation, Mr. David Rivkin agreed that the China-U.S. economic exchanges will still move forward, but in light of the geopolitics tension, the parties will be inclined to choose international arbitration to resolve China-U.S. commercial disputes so as to make sure the outcomes of the cases will be recognized and enforced. Mr. Gary Born also believed that enterprises of the two states may be hesitant to seek reliefs before their local courts of law in the current situation, and international arbitration may provide them with a more independent and impartial means to resolve disputes.

Regarding how to identify a suitable arbitration institution and seat of arbitration in China-U.S. commercial transactions, Dr. Chen Fuyong referred to the statistics of the BAC’s past case administration and experience to highlight the BAC’s competence in handling China-U.S. commercial disputes. According to the statistics, the BAC has dealt with 122 disputes involving American parties ever since its establishment, excluding the foreign invested enterprises set up by American investors pursuant to the PRC law. The BAC Arbitration Rules are highly in line with international arbitration practice, which ensure the rules can better meet international users’ needs. Meanwhile, benefited from the professional case manager team and technological support, the BAC keeps professional and efficient case administration quality. As the statistics show, the aforementioned cases involving American parties took six months on average to be concluded. Ms. Sarah Grimmer and Ms. Lim Seok Hui referred to Hong Kong and Singapore as examples, respectively, sharing their institutions’ advantages and efforts in handling China-U.S. commercial disputes, as well as their efforts to ensure efficient arbitration procedures during the outbreak of the pandemic.

Speakers also had exchanges on issues that American enterprises often have worries about when participating in arbitration procedures in foreign countries, including those administered by arbitration institutions in the mainland China, especially when the arbitration is initiated by the American parties against Chinese enterprises, how the American enterprises could make sure that it will receive equal treatment in the arbitral procedure; and if it wins, whether it could expect the winning award could be recognized and enforced by Chinese courts. Dr. Chen Fuyong gave responses to such issues from the perspectives of arbitral tribunals’ independent discretion over the merits of the case, the statistics of China-U.S. commercial cases handled by the BAC, the status quo of arbitral awards’ recognition and enforcement, and the reporting system ultimately to the Supreme People’s Court for refusal to enforce foreign-related arbitral awards.

Indeed, the geopolitics tension will bring unpredictability to the China-U.S. commercial exchanges, but they will still move forward, and will to a certain extent alleviate the politics tension. This Webinar is just a part of the ongoing non-governmental exchanges and dialogues between the two states. The BAC as a leading Chinese arbitration institution with certain reputation globally, endeavors to be a pioneer of international dispute resolution practice exchange and culture mutual learning, and by way of building a platform of exchange, it becomes an invisible bond connecting legal practitioners from both China and the U.S., constantly highlighting the significance of dialogue and exchange. We sincerely welcome professionals from various industries to pay continuous attention to and participate in events organized by the BAC.